The Feds and our Schools

May 19, 2014
First a short quiz:
1. What percentage of K-12 education funding do you suppose comes from the federal government? Choose one before you read on.

2. Now guess which of the following educational programs rely on federal funding for half or more of their revenues. Choose before you read on.

The federal government has invested in public education since President Johnson's original programs to equalize school opportunity in 1965. Yet schooling is essentially a state and local responsibility in the US. Why then is it that so many federal candidates campaign on education platforms? And why are Race to the Top, school tests and charter schools dominating our news about schools?

The reality is that just 12% of education funding comes from Washington. (answer d for question one) The other 88% is local and state revenue and should be controlled locally. In theory, we have locally elected citizen school boards to run our schools. But what authority do they really have?

The federal government exercises substantial control over public schools without footing much of the bill. In order to receive federal dollars -- primarily for Title 1 programs in high poverty schools and special education -- states and districts must comply with all federal requirements. If a school receiving Title I funds continues to have students who test poorly, the federal government can close down the school and fire all the teachers.  States enact policies to align with federal regulations, then require districts in turn to enact similar ones.

President Obama's signature "Race to the Top" programs place requirements on states to continue to receive federal dollars. This includes adopting the common core standards and student tests, evaluating teachers based on their students' scores, sanctioning high-poverty schools for low scores, encouraging charter schools and other reform measures. "Race to the Top" was billed as a more flexible version than the previous "No Child Left Behind" requirements.

I was a special education director for a medium-sized district from 2000 - 2005. I managed a $5,000,000 budget for special education in our fifteen schools. In my first year, the federal contribution to our special ed services was just $472,000 -- less than 10% of the total spent. About $3.5 million came from the state of Oregon. The rest came from the district's general fund. By 2005, the federal allocation had increased to $890,000, but the rules are stacked against districts. Even when federal funding increases, districts are not allowed to reduce their general fund expenditures because of something called Maintenance of Effort (MOE). As the person responsible for special education spending, I had very little authority to tighten my department's belt or to implement cost-saving measures. This was endless frustration in a district perpetually facing budget cuts and higher and higher personnel costs.

Maintenance of Effort requires districts to show that they have not reduced their non-federal spending on programs that receive federal support (like Special Education and Title I). This means that when district revenues fall -- for whatever reason -- they must continue to pump the same amount into their special programs. The intent is to insure districts don't "supplant" federal funding, using it to pay for things the district would otherwise have paid for itself. In other words, federal dollars cannot be used for normal school expenses, but only for add-ons.  This alone is enough to cause education wonks like myself to wonder: then just how valuable are those federal dollars?

Who is hurt by this? Regular classroom instruction is hurt. If revenues decline 5% but part of your budget can't be cut the same as others, then the rest (classrooms) take an even bigger hit. This same principle applies to Title I programs which support high poverty schools. The dollars can only be used for "extras", not to replace those priorities the district has already funded.

States and districts are in a trap. Either refuse the federal support (12% of total) or continue to follow all of the rules drafted in Washington, DC. The champions of those rules tend to be located in the state capitals. In Oregon, our Department of Education (ODE) has a budget of $120 million. A full 73% of the department's budget is paid by the federal government, tying those who work in Salem closely with federal programs. (answer b for question 2)

In 1965, President Johnson's landmark education bill was designed to equalize schooling as part of his War on Poverty. It went a long way to accomplishing that. Unfortunately, now fifty years later, the federal dollars constitute less help and more control, resulting in testing regimens and a hyper-concentration on the tested skills that undermine programs in the arts and sciences as well as experiential learning that has been shown effective. We are now down the rabbit hole of tightly managed programs with single metrics (tests) that lead to ever more restrictive programs. Schools in poor neighborhoods are scapegoated while other poverty factors are ignored. And because we can now blame public schools for their alleged poor performance, more and more of public education dollars are skimmed off by charter schools, many of them run by highly profitable corporations.
I don't advocate a complete removal of the federal government from our schools. But I must side with conservatives who question whether or not federal intrusion constitutes a net gain or a net loss for our kids. When federal dollars can only be spent on "extras" but their rules supplant the wisdom of teachers, administrators, parents and school boards in all areas, it's hard to be their champion.


See also: Charter Schools: Segregation through the Back Door
If We Copy the Top Nations
How Parents and Schools Create Innovators
Tweet
federal education budget federal overreach ODE race to the top special education title I

Charter Schools: Segregation through the Back Door

Once upon a time, families had school choice:  they could enroll their children in the local public school with all the neighbor kids or they could pay tuition to private schools.  For years, private school advocates argued that families paying tuition should not have to pay taxes to support public schools.  That argument went nowhere.  Instead, they got an even better deal:  tax revenues siphoned off to their private schools, now reformulated as charter schools.  In the past few weeks, I've had the chance to meet with parents in three diverse cities:  Portland, Chicago and Bakersfield.  The three states have organized their school systems slightly different, but parents' stories are the same.  One of these is my daughter, recently returned to Portland from several years overseas.  Her home is in a mixed urban neighborhood and she looked into schooling options for our 8-year old grandson before returning.  The neighborhood school, King, was impressive.  A new princi

Among the earliest casualties in the education funding wars were class field trips.  You may remember a special field trip from your elementary days -- touring a factory or firehouse or dairy.  In high school you may have been lucky enough to hop a bus for a tour of a local college or vocational program.  Field trips broadened our awareness of the community around us but didn't always add to the curriculum. But field studies do add to the curriculum.  In fact, teachers should look at the community around them as the place to apply what is learned in the classroom.  Imagine the following: Physics students examining the structure of a nearby bridge. History students interviewing elderly folks at a nursing home. Government students participating at a Congressman's town hall meeting. Biology students measuring water temperatures at a fish spawning stream. English students creating a story about early years in their town solely from the information on cemetery tombstone 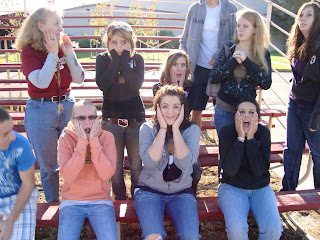 What Students Taught Me

I wrote this Educational Philosophy statement twenty years ago. It still rings true. The important things I learned about schooling, I learned from students. ********************************** The most influential architects of my educational philosophy have been young men and women whose names do not grace the pages of famous pedagogical works. As I continue to learn from these young scholars, my attitudes and insights about schools and education evolve. Certainly however there are principles which do not waver:  ·          There are no ‘throw away’ kids. ·          Applied learning is more effective than rote. ·          Students are often capable of more than we ask of them. ·          Schools must be physically, emotionally, and intellectually safe for all.   Yet some students’ experiences have been particularly enlightening for me and from them I have learned much about schools and schooling.  Some of the import